This week Switzerland has been crossed by snow storms for days. Some mountain cantons have many villages isolated…

And even Zurich city is blocked: trams and public transportation are stopped.

The snow, with its silent white cover, makes everything the same. Even Switzerland, the organised country, where everything is planned, is shut down by the snow like every other “normal” country…

It is not fair to criticise government decisions during an emergency, but if these decisions directly contributed to spread the Coronavirus infections, causing a lot of deaths, then I think they should be denounced. Hopefully that everything can work as a lesson learned.

The Swiss government, the Swiss perfect application of the federal state which gives full powers to the Cantons regarding the public health, the slowness of the Swiss politicians, and the absence of humility to learn from other countries are dramatically and very quickly dragging Switzerland into a new severe COVID-19 emergency, putting this small Country very low in the ranking of the efficiency of the implemented measures to combat COVID-19!

Here some macroscopic evidences and unforgivable Swiss mistakes since the start of the pandemic.

1) During the “first wave” of the contagion, started also in Switzerland at the very end of February 2020, the main consultant of the federal government and communicator on COVID-19 matters was a certain Dr Daniel Koch, so-called “Mr Corona”, head of the department of infectious diseases of the Federal Office for Public Health. In some interviews, he started minimising the pandemic, “showing off” his very past experiences in Africa during the Ebola outbreak, and adopting the still disgusting comparison between COVID-19 and the “usual” flue. He never warned about the use of protective masks; on the contrary he always said that the social distancing would have been enough, even on the public transportation, to avoid any contagion! According to Dr Koch, masks would have given the people a fake feeling of safety. When Dr Koch was calmly spitting his “truths”, all the world, including (even if late) WHO, already recognised the importance of adopting protective masks to control the diffusion of possible infections.

Dr Koch retired in April and stopped brainwashing the Swiss population, who was never really taking into account the possibility of using masks indoor, only relying on hygiene and the 1.5 meter distance. Distance which, by the way, very few were really keeping, misunderstanding the “common” maximum 50 cm with the minimum 1.5 meter! However Dr Koch left no real successor as single point of communication and expertise, leaving the health minister quite alone.

2) Switzerland introduced the mask obligation, on the public transportation only, on the 6th July 2020, i.e. more than 4 months after the start of the emergency! A scandalous delay!

3) Even if some cantons obliged the use of masks indoor, some others never imposed this measure, despite the exponentially increasing number of infections. Unacceptable!

4) Finally, with a guilty and unforgivable delay, the Swiss federal government obliged the use of masks indoor (public places, stations, bus stops, airports, …) only on the 19th October 2020, 7 months after the start of the COVID-19 “hell”! Unbelievable!

5) After having reported increasing new infections every day for the last two weeks, last Friday, 23rd October, Switzerland hit 6’634 new infections in one day. Considering that Switzerland has a population of slightly more than 8’500’000 inhabitants, you can calculate what this number would mean in your own country…

6) Although the infection numbers are increasing exponentially in the last weeks, after obliging the use of protective masks, the health minister, Alain Berset, and the government are hesitating to define new more severe rules to try to contain and reduce the number of infections. The health minister promised new measures but not before next Wednesday, 28th October. Why? Because he has to agree these measures with the cantons (and probably with his government mates…).

When the emergency can put the health of the population at risk, the actions shall be severe and quick and not just politically aimed at not changing the daily routine of the population! Why not “motivating” the respect of the rules by introducing significant fines for not following them, to eventually finance the most penalised working categories in this emergency? 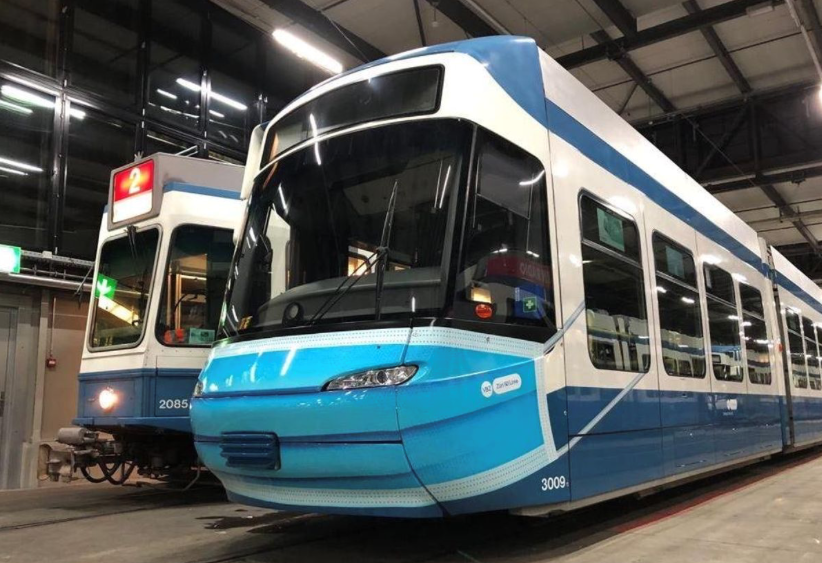 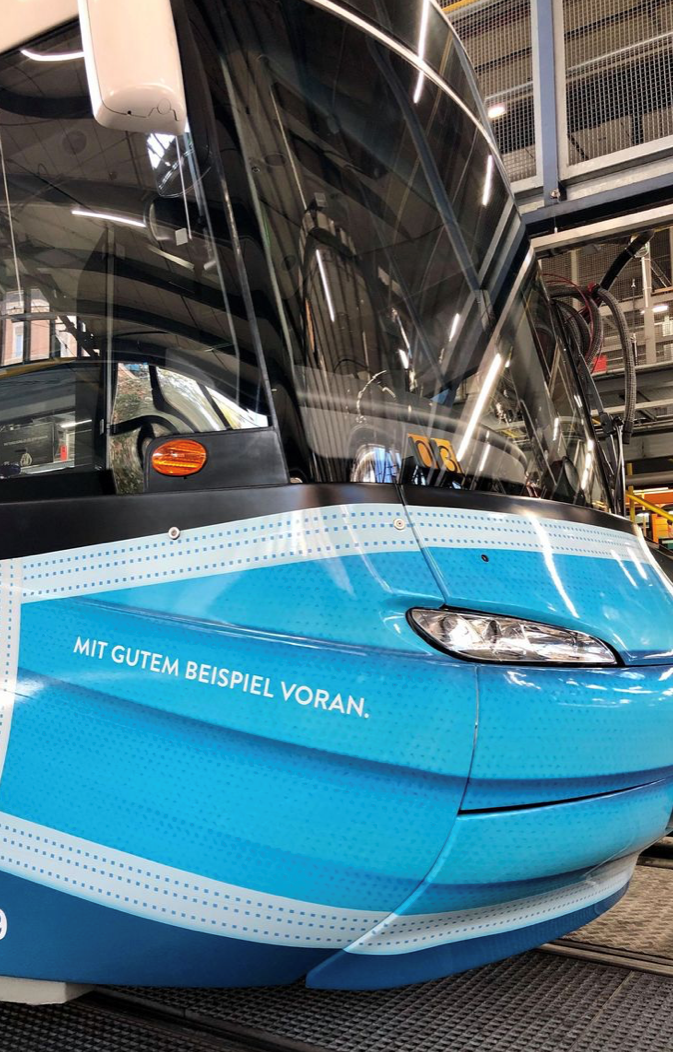 The trams in Zurich wear protective masks, protective masks with the motto “with good example forward”!
This is a wonderful signal and a good message to restart after the lockdown due to the Covid-19.
Public transportation shall be used by the passengers using protective masks, which is the only way to reduce the danger of contageon, being impossible to keep the distances on a bus, a tram or a train!

Great example from Zurich city! Especially because surprisingly the Swiss ministers and the Federal Office of Public Health are continuing to sermonise on the importance of keeping distances and washing hands, neglecting the decisive importance of protective masks! 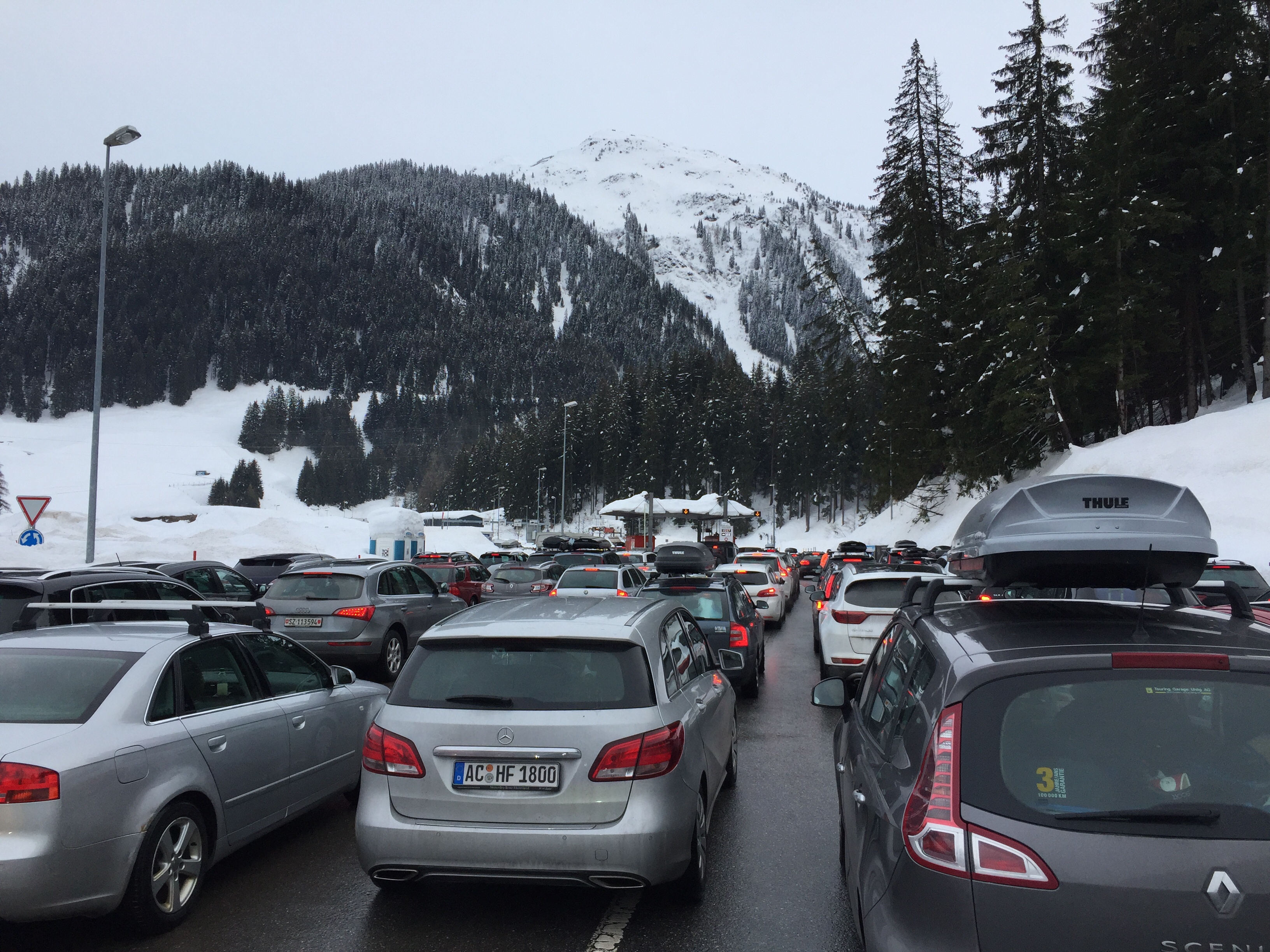 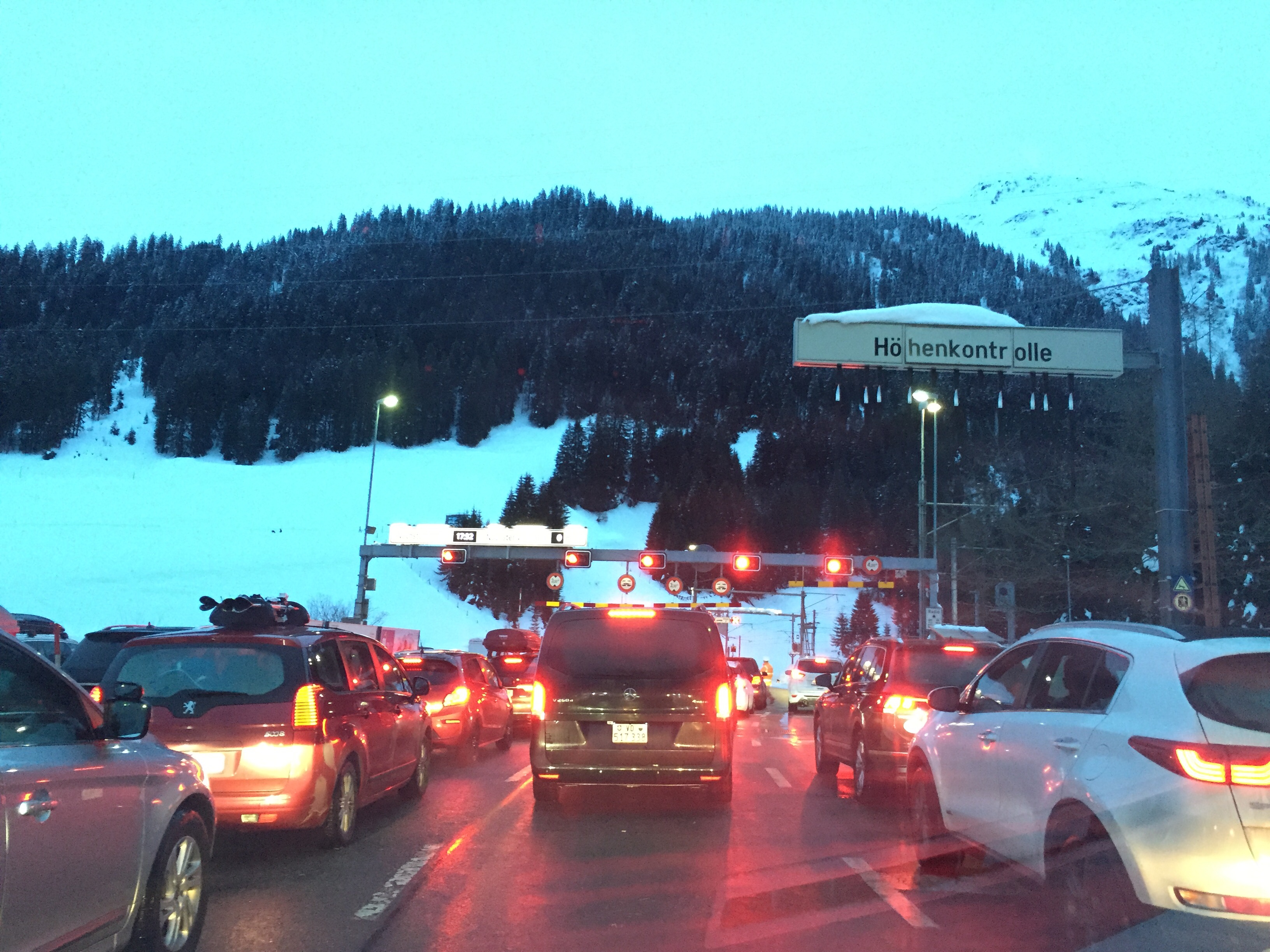 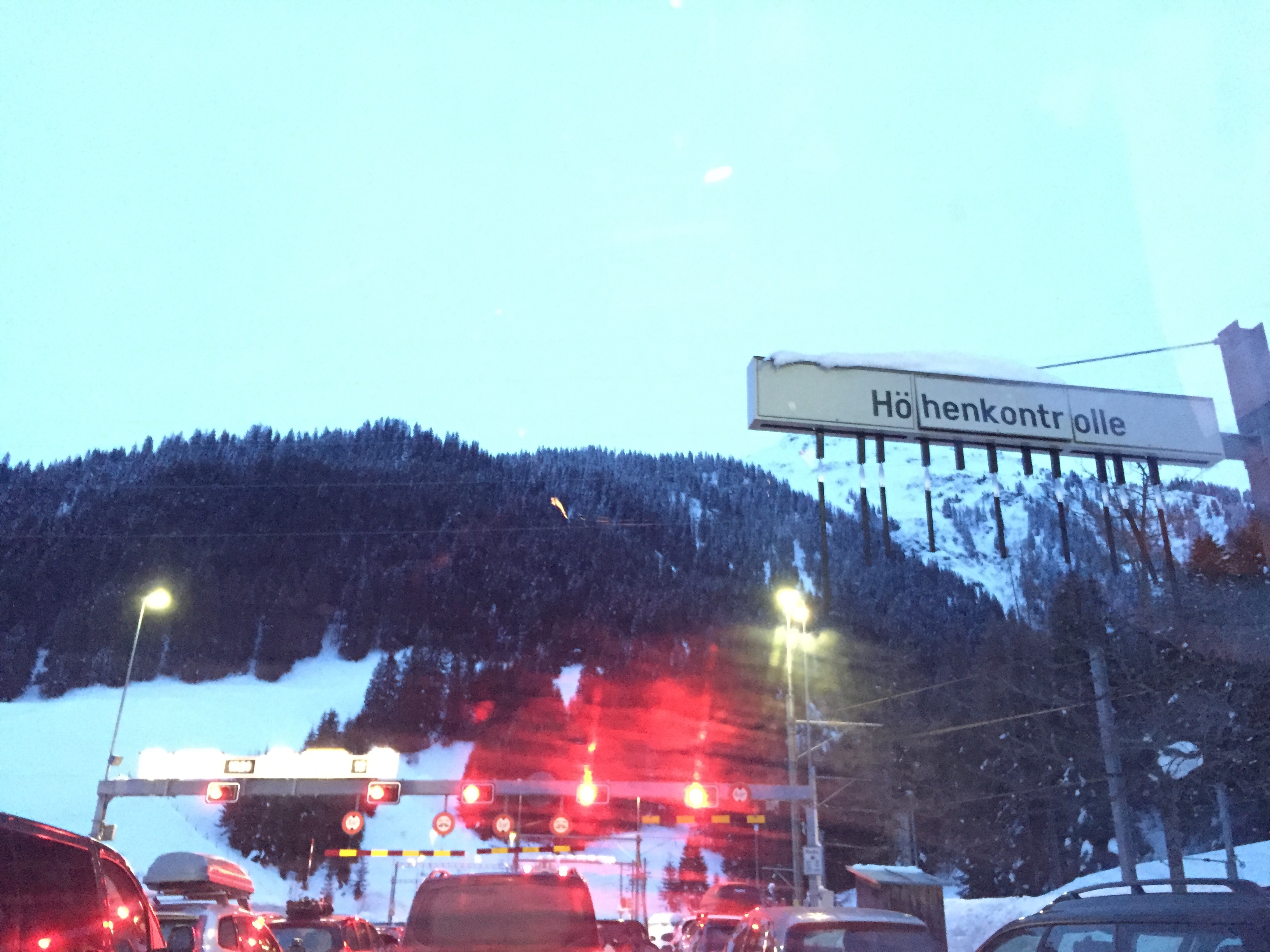 Photos: On the way to Livigno (IT) from Switzerland. Queue for the train with car loading (Vereina) plus queue before the tunnel (Munt La Schera) afterwards. Total waiting time: 7 hours! Unbelievable in a civil country!

What is Switzerland famous for? 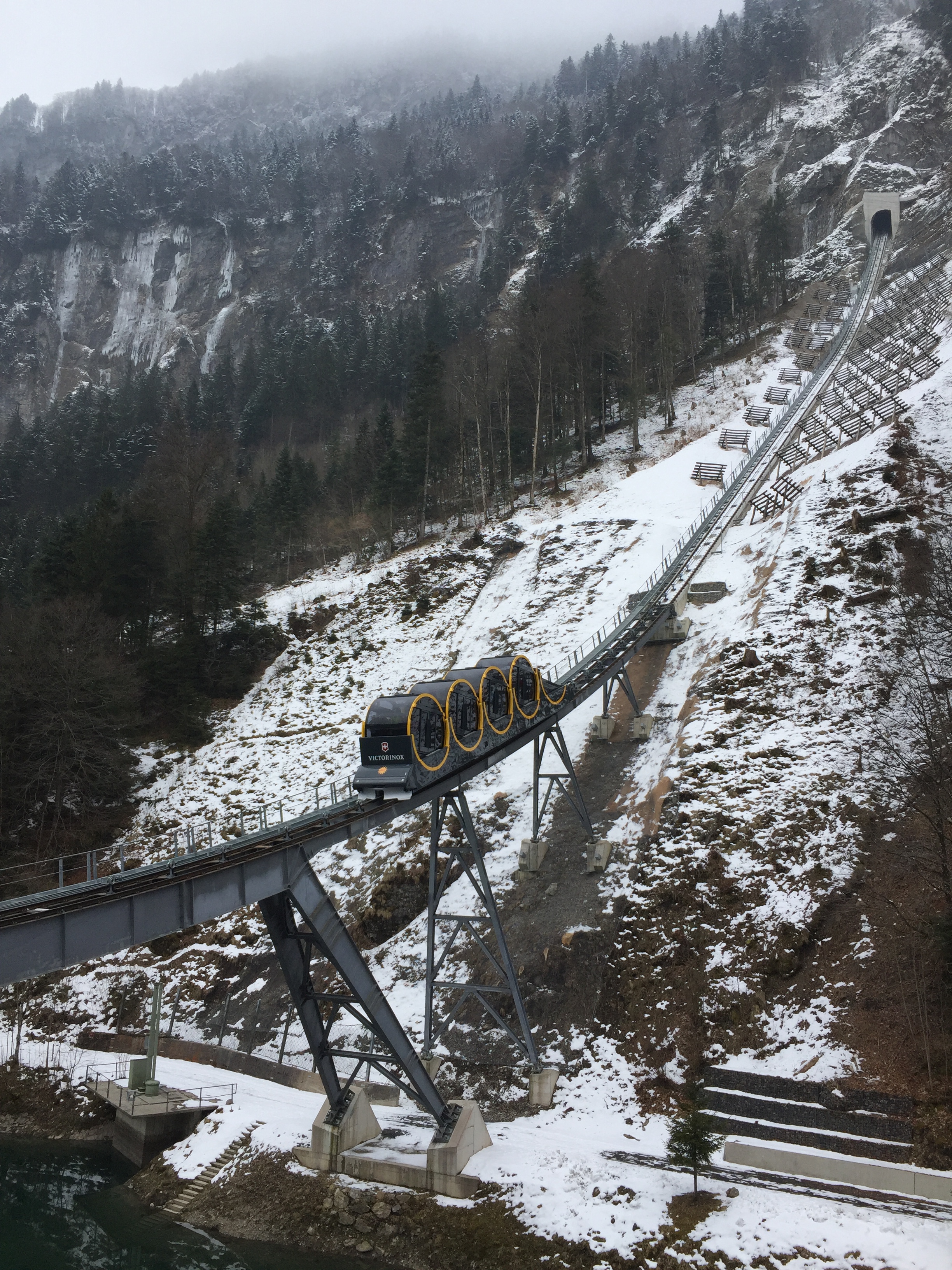 Last weekend my wife and I went to the mountains to Stoos (Canton Schwyz) to bring our two small daughters to get ski lessons for the first time!
Nothing special, you would say, apart from a nice family reminder.
Actually we did establish a record, and even a world record!

We reached the top (Stoos village) by the steepest funicular railway of the world!
This amazing “vehicle” had been just inaugurated on the 16th December 2017.
It looks like a futuristic spaceship, like the strangest of the roller coasters. Nevertheless, thanks to the automatic level compensation of the four cabins, even if you drive almost vertically, your feet are always well in contact with the floor.

Here some figures of this terrific engineering masterpiece:
110% incline (World record!);
47° maximum slope;
1500 passengers per direction of travel per hour;
3-5 minutes’ travel time;
744 elevation gain;
1’740 m distance between the valley and the mountain stations;
34 passengers per cabin;
14 years needed to complete this work, from planning to realisation.

This is another surprising example of “Swiss made”, which makes the white crossed Confederates so proud!

In Switzerland I always have the impression to be overwhelmed by the time! Or at least more than anywhere else.

There is a timetable for everything, and everyone knows by heart the useful schedule: trains, buses, shops being among the most common. In the village where I live with my family you need to rely on these schedules…

Aaah!
How nice it would be living in a big city (again), where you would have shops opening at normal times and until quite late in the night! And not shops opening half an hour earlier than usual on Saturdays (yes, earlier!), when you should be supposed to sleep at least half an hour more than on the weekdays!!

An alternative title for this post could have been “Guinness world record for Swiss railways?”.

Simply said. This morning I was boringly waiting for the train connection to reach my office and, weirdly, I started thinking (normally I do not think so early in the morning, and even on Mondays!).
For sure! That list of mysterious letters painted on all the Swiss trains, which I know so well, is an acronym(*). One of the million existing acronyms, for sure.
But then, once I reached my computer, I started researching.
If I am not wrong, that is the longest acronym in the world for a railway name!

I immediately informed them, the SBB_CFF_FFS, of this sudden (at least at my eyes!) achievement…I’m still waiting to be scolded for annoying them on this gewgaw matter or to be challenged on the truthfulness of this possible world record.

I think everything makes sense!
Visiting the SBB (I stay short for reciprocal convenience) website (www.sbb.ch), their headline defines themselves as the “biggest railway station of Switzerland”.
At least now they can even claim something more…majestic!

(*) Acronym (I know that everyone knows this word, but I just wanted to be sure that it’s the right one to be used in this context):
From wikipedia (http://en.wikipedia.org/wiki/Acronym): An acronym is an abbreviation formed from the initial components in a phrase or a word. These components may be individual letters (as in “laser”) or parts of words or names (as in “Benelux”).

“Is this [seat] still free?” This is a very popular question in Swiss German, the German language spoken in Switzerland (by the way, one of the various versions…depending on the region). Common and legitimate question to know whether a seat is available or not. Where would you normally ask such question? I can think of cinemas, theatres, classical music concerts, i.e. places where you go to enjoy some hours of fun and relax. If I had to ask this question in Swiss German, like the Swiss, then this is the perfect question to ask on the trains! Whenever the Swiss seek for a free seat and see a tempting one available, they don’t dare to sit yet. Before doing it, they always ask the “famous question”! Who do they think I am waiting for if the seat next to me is free? I am not at the cinema, waiting for someone to enjoy the movie with me! I just hopped on a train to go home or somewhere else. Although this is the “train” most asked question in Switzerland, it’s for sure a rhetoric question. I never heard someone replying “No, this seat is not free!”. Such a reply would probably make the perfectly congested Swiss railway system collapse. Such a reply would make lots of passengers panic, being deprived from one of their vital certainties: the spoken permission to sit on a public free seat!

Swiss train stations are the pride of all the Confederats! But the quality of the air, even outdoor, along the various platforms is worse than in Beijing (Nothing against the capital city of China, but this city seems to be the one with the worst air quality in the world. Statistical data from: http://www.dailyfinance.com/2010/11/29/10-cities-with-worlds-worst-air/). Last week I went to work by train. Outdoor smoking is allowed everywhere in Switzerland, but the short distance between the platforms of the station, the high density of commuters and the high number of smokers make the Swiss air almost unbreathable between the railways! I had to walk continuously to find some spots of fresh mountain air to breath! Of course I have nothing against the smokers!!!