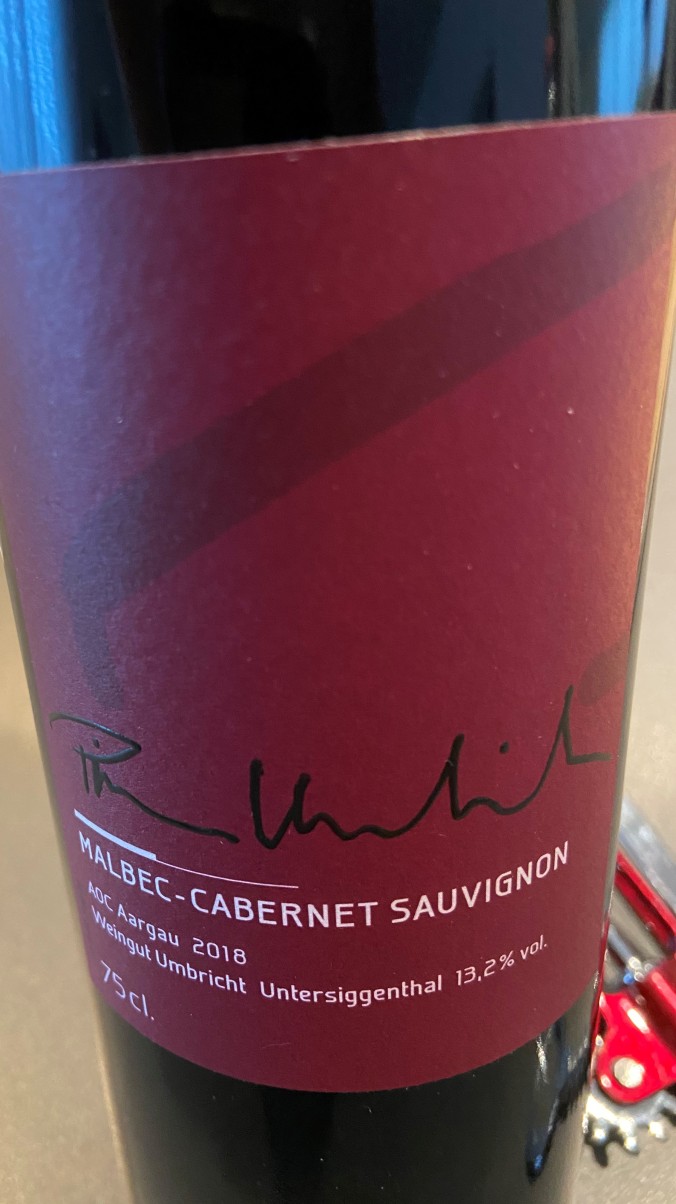 Last night we had a nice dinner with a good bottle of red wine, which was in my Company’s this year’s Christmas present.
Very good wine, a blend of Malbec and Cabernet-Sauvignon, from a local Argovian producer.
It was also quite strong. I checked the bottle and I saw the “magical” number: 13.2% vol. alcohol! Thirteen POINT TWO!
Have you ever seen this? I would have expected either 13% or 13.5%. But POINT TWO was an absolute prime for me.
Maybe even the percentage of alcohol in Switzerland is calculated and indicated on the bottle in their own unique Swiss way…

Last week I was passing by the “Gemeindehaus” (Parish hall) of the village where I live, when I noticed such installation of drawers!

(How many times I already saw it without getting it?)

I went closer and I finally understood: the small drawers are a real free bookstore! Each mini drawer contains a book and its color indicates the book subject. You can choose among various themes: Bestsellers, thrillers, biographies, etc…

This is a great initiative organised by the cultural department of the village. You pick up a book, bringing and leaving there another book of yours!

Covid-times? Ok, the picked up book can be always thoroughly disinfected, can’t it?

After a long working day I was lucky yesterday to be able to relax while walking home. 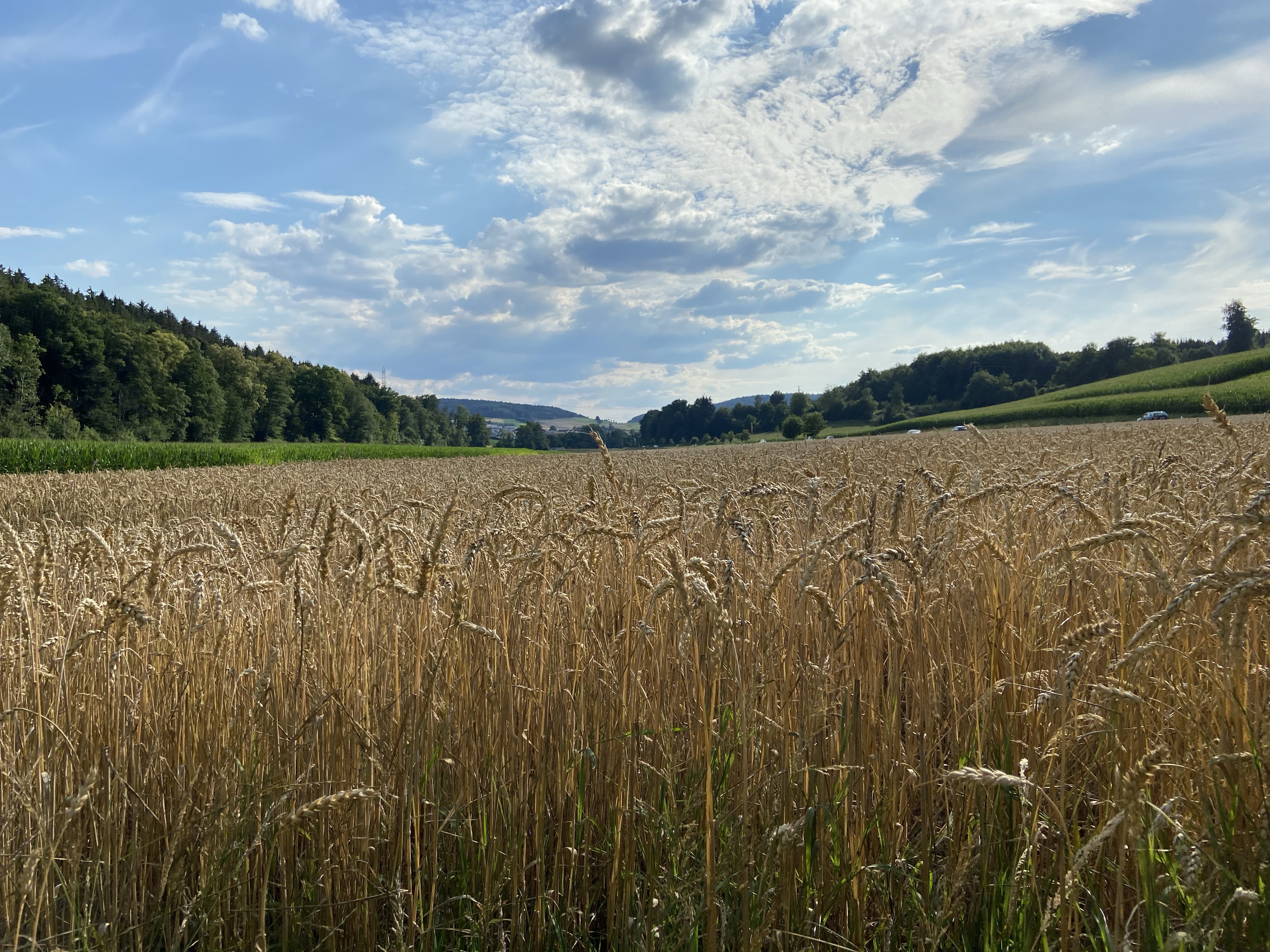 … no one is using the umbrella in Switzerland?
Even if the sky is very gray and the clouds are full of rain, the typical Herr Schweiz or Frau Schweiz never take their umbrella before leaving their house.
That’s a mystery. Without protection from the rain, is someone maybe feeling more powerful? 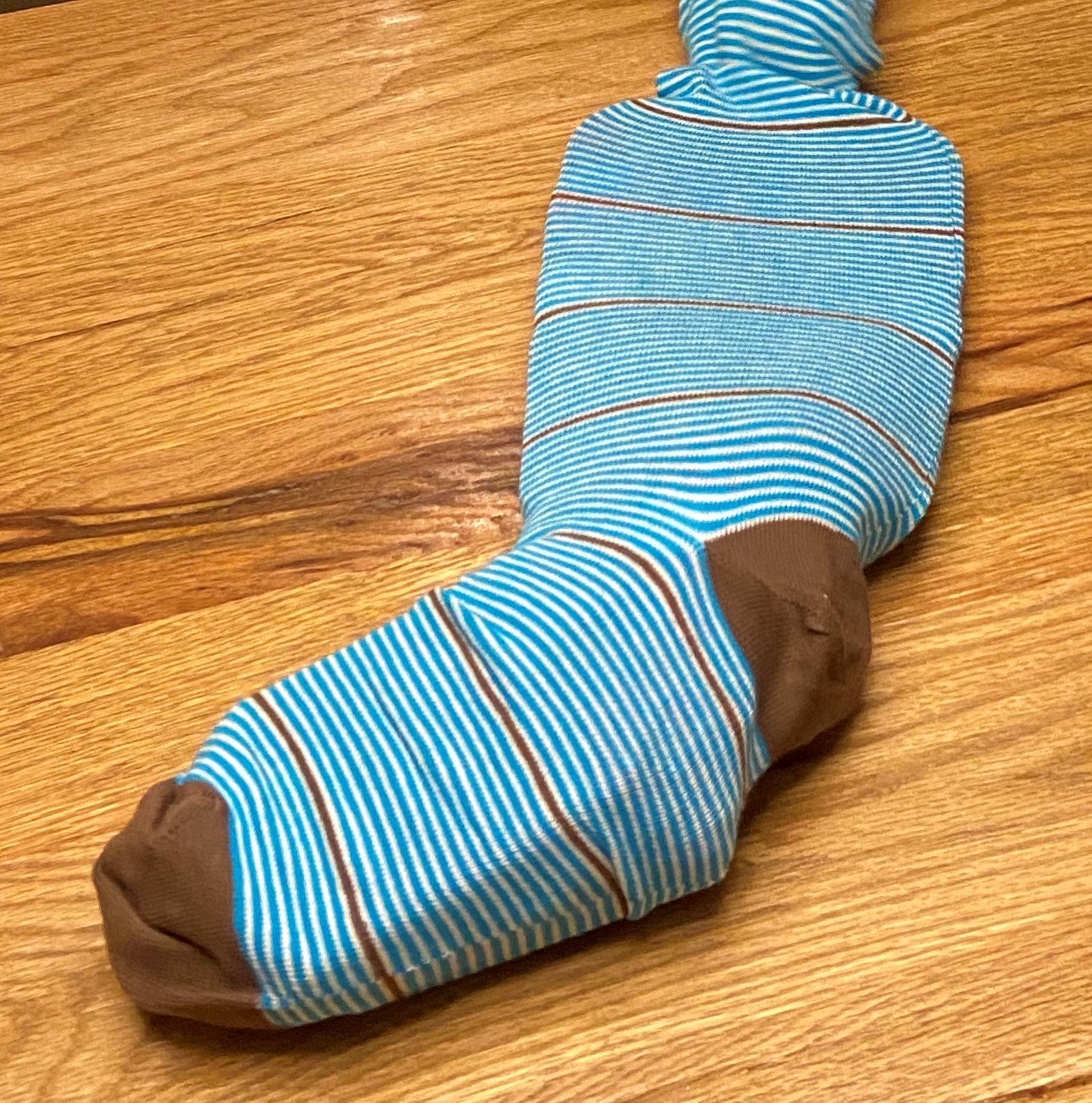 The Christmas time is traditionally finishing with the celebrations of January 6th.
In some countries this day is even a public and religious holiday.
The Christian church celebrates the arrival of the three kings to see and adore the newborn Jesus.
Coming from Italy and living in Switzerland, I (and especially the kids) can “celebrate” in two different ways, following different popular customs.

The Italian tradition says that in the night of January 6th an old woman, a kind of witch (called in Italian “Befana”) comes and brings sweets to the good children and coal to the bad ones. In order to get these presents, the kids have to hang an empty sock in the living room, which this old woman eventually fills in overnight…
This year the children got a lot of chocolates from “Befana”. And I can finally say that they deserved them!

The Swiss tradition (Unfortunately in our Canton, Argovia, January 6th is not a public holiday) celebrates this day by eating the so-called three king sweet bread.
All the main supermarkets sell it… or you should even bake it at home, if you can. The bread is sold in a package with a golden crown… Inside one of the pieces of this bread a very small figurine (2-3 cm) of one of the three kings is carefully hidden. The person who finds this miniaturised king (if he or she does not break the teeth) can happily wear the golden crown!
This year I was the lucky one! I was almost swallowing the small king, but I fortunately realised that it would have been better to save it from an inglorious and pathless travel into my bowel! 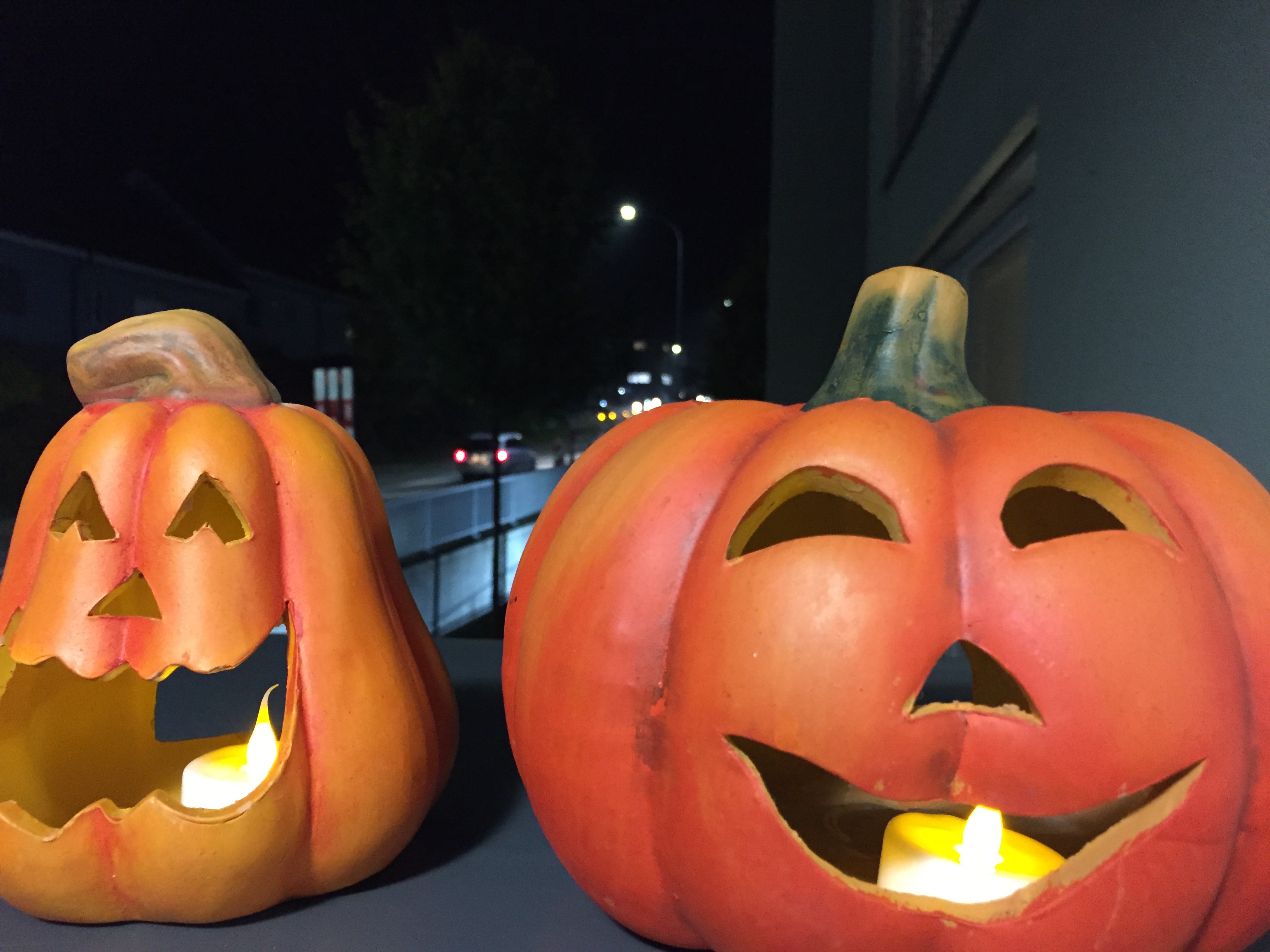 The pumpinks are smiling also in Switzerland in the night of Halloween!

It should be certainly a trick, rather than a treat…
… especially if you think that one of the most American “celebrations” is very popular also in the Confederation, where the USA are not so beloved and it is very rare to find someone not blaming the US for something!

Some days ago my working day started with such beautiful natural spectacle.
The famous proverb tries to explain any… red sky. Depending on the time of the day, if red, the sky is supposed to be a sign of good or bad weather…

In Switzerland there are no sea and saylors (maybe a few at the lakes…): therefore, in front of the beautiful morning red sky, the best option was just to be stunned! 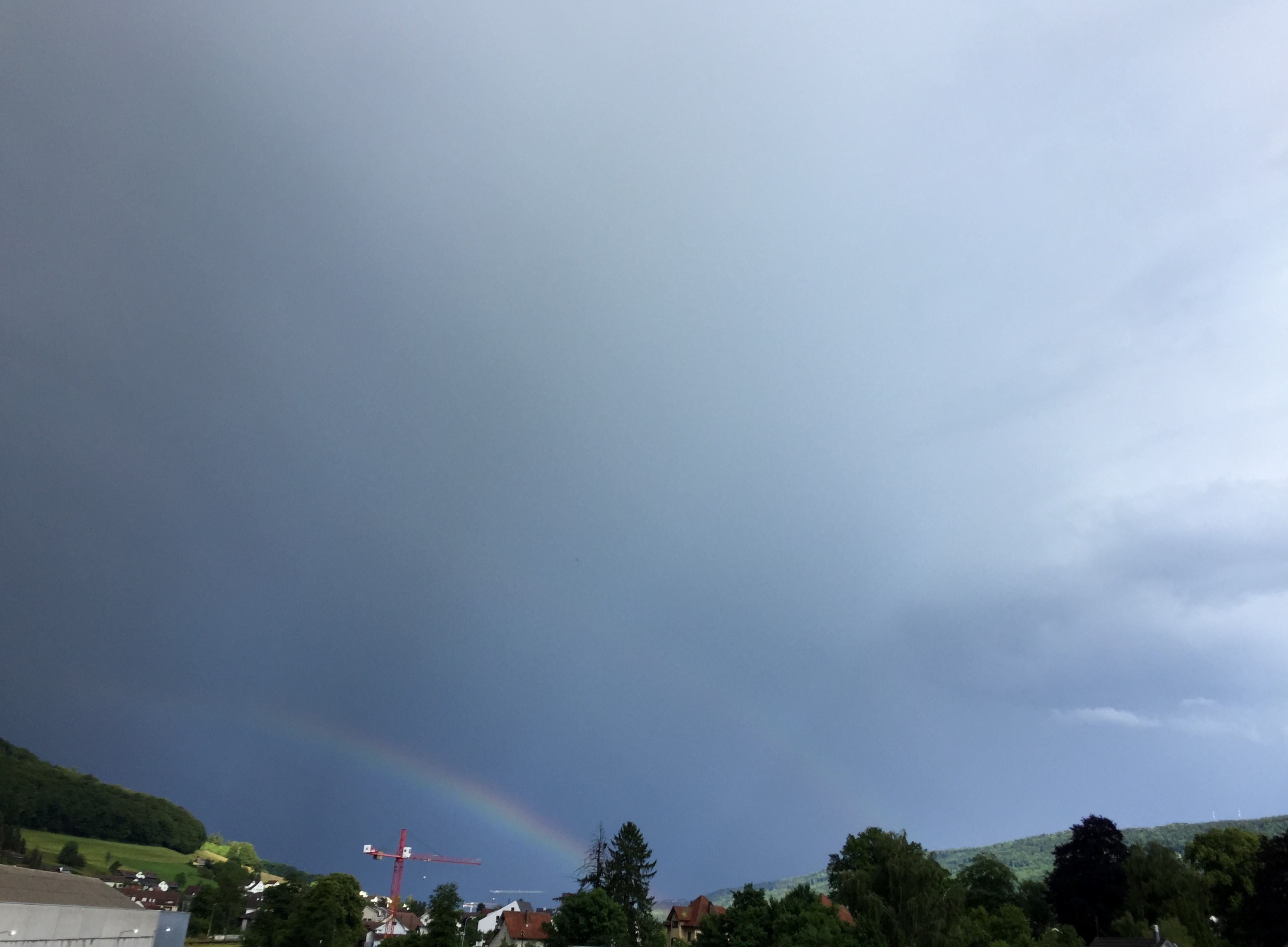 Suddenly a strong wind started blowing, the trees were fighting to remain attached to the ground, the sky became all dark, thick, black, scary!
Immediately the clouds vomited litres of dark grey water and ice onto the soil… 20 minutes of apocalypse… and then quietly the world started again.
The sky quickly turned blue, the sun started blinking again and the rainbow brought its comforting, soft, magic stripes and good mood for everyone!

Picture “My little pony: friendship is magic” from: Variety.com

This post will not speak of the famous series “My little pony” invented by the American Hasbro and very popular among all young girls (including mine!).
You will not hear me speaking of pony characters such as Twilight Sparkle, Rainbow Dash or Pinkie Pie (Having two girls, I am a master of the “Little Pony” nomenclature…).

Instead, I am telling you a unique experience I got today.
While going to the supermarket of a neighbouring village to buy some water, I had this “prime”: in a small piece of land just next to the supermarket I saw a “baby” (almost just born) pony, a real little pony!
I never had the opportunity to see such small animal before!

It was very cute: first, sleeping next to the mother under the sun, and then starting to walk around in an unstable way.

The pony mother was very protective: when the pony father tried to get close, although busy with her “herbal” meal, she gave him a two leg kick, which made him immediately go back to his corner! This is harsh, this is actual reality, this is true maternal protection instinct: well different from the coloured, carefree, timeless, imaginary stories of… “my little pony”! 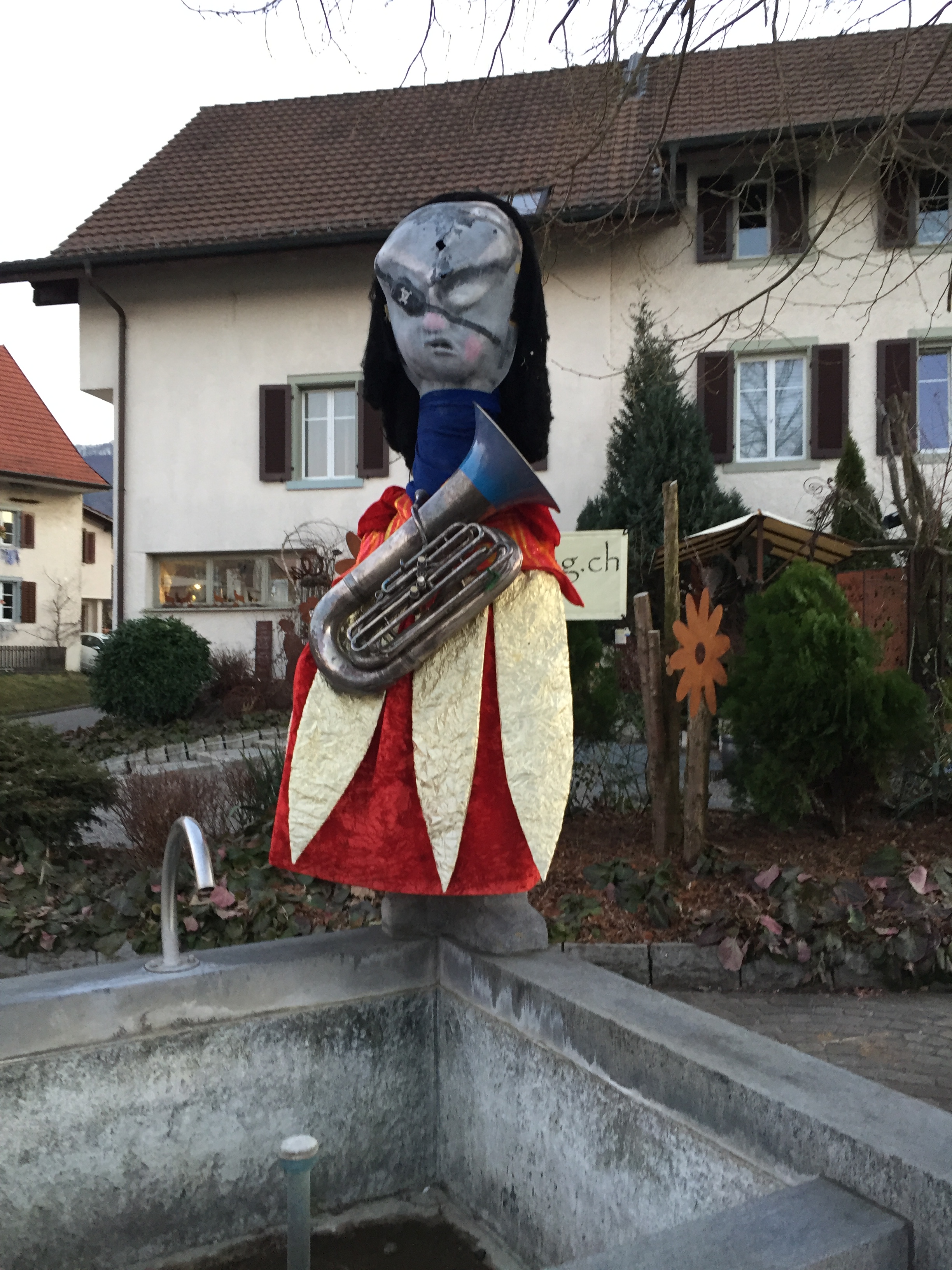 The Carnival closed its curtain on Tuesday, as usual (even if in some cantons and cities it will last some days more).
During the Carnival, people normally have fun, get masked with funny costumes, make jokes and go to parties.

In the small village where I live, as every year, during this “amusement” period, some weird, dreadful and scary characters suddenly appeared in the weirdest places…

Quite creepy, isn’t it?
This is just Carnival, but maybe in Switzerland they mistake it for a horror movie?!